It is truthful that a thermally well-insulated house is an energy-efficient and ecological property. Legal regulations and people's growing awareness have resulted in the need to reduce energy demand and related costs. An important element in the struggle against excessive use of energy in residential buildings and public utility facilities are certainly the insulation materials, adapted to function in specific conditions. Reducing energy consumption can be achieved through effective thermal insulation of all building partitions, but without the right materials this will be virtually impossible. Let us take a closer look at the thermal insulation materials available on the market today.

Insulating material and its coefficient 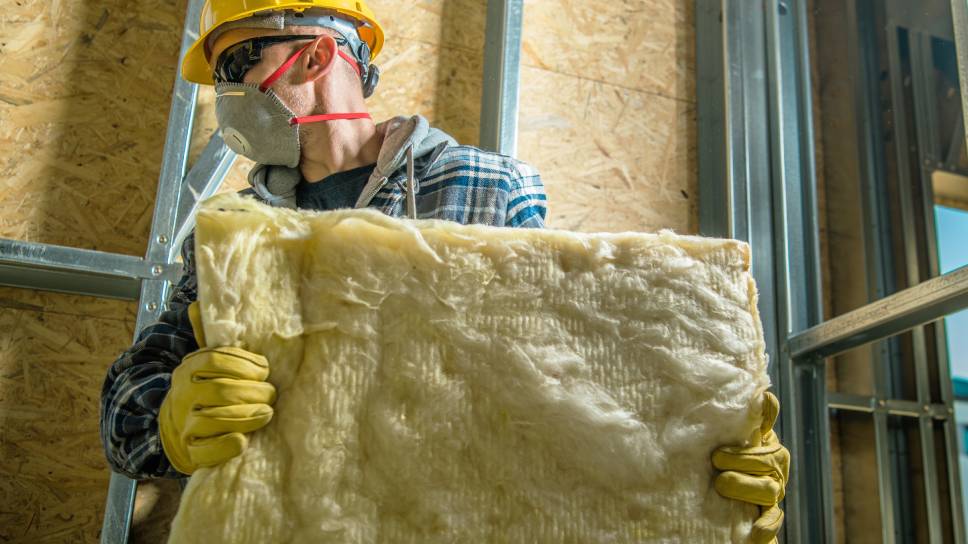 This is a material that features a wide range of applications, ensuring proper insulation of the building, its effective acoustic insulation (it dampens air and shock sounds), as well as having a fire-protective and vapour-permeable properties.

Mineral wool consists basically of two products with very similar parameters - rock wool and glass wool. The former is made from basalt (high resistance to very high temperatures), while the latter is made from quartz sand or recycled glass.

The thermal conductivity coefficient for mineral wool products ranges from 0.031 to 0.045 W/mK. Mineral wool has high durability and resistance to deformation, and it does not degrade in contact with substances containing solvents. However, mineral wool absorbs water, which impairs its thermal insulation properties. To eliminate water absorption, mineral wool is impregnated with mineral oil. Incorrectly made (placed) thermal insulation made of mineral wool may result in the appearance of thermal bridges in the near future, which will significantly affect the energy efficiency of the entire building. Moreover, wool is a material which is quite difficult to apply (e.g. gaps in the attic), especially for inexperienced persons, which also increases the risk of heat loss in the building. 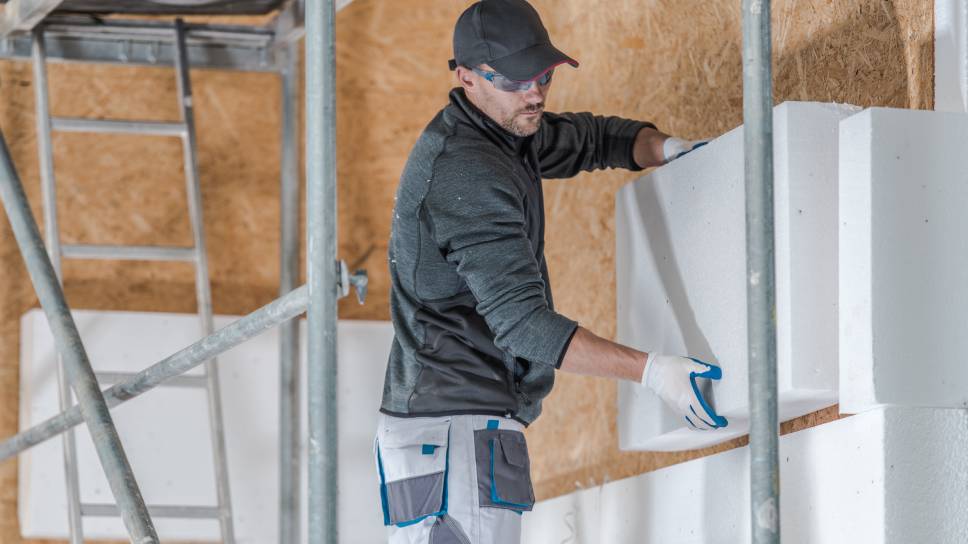 Polystyrene foam, as an insulating material, is primarily characterised by very low water absorption, due to which it can be successfully used to insulate those parts of a building which are exposed to contact with water, such as foundations, basement walls or floors on the ground.

In addition to traditional foamed polystyrene, extruded polystyrene is also available, providing thermal insulation at a level of 0.021 to 0.026 W/mK, which is harder and less absorbent. It is available in blue, green or pink and is recommended for insulating inverted roofs, garage floors and floors on the ground, i.e. wherever there are heavy loads.

However, expanded polystyrene does have its drawbacks. It is not resistant to a number of chemical agents, such as solvents, paints, glues and wood preservatives. Moreover, it is a material which is rather leaky in terms of water vapour diffusion (penetration). This means that only a small amount of steam penetrates through walls insulated with polystyrene foam. Styrofoam is also sensitive to high temperatures and fire. Temperatures exceeding +80oC can damage it, however it is a material with self-extinguishing properties and in case of fire it does not burst into flames, but melts giving off a lot of black smoke. 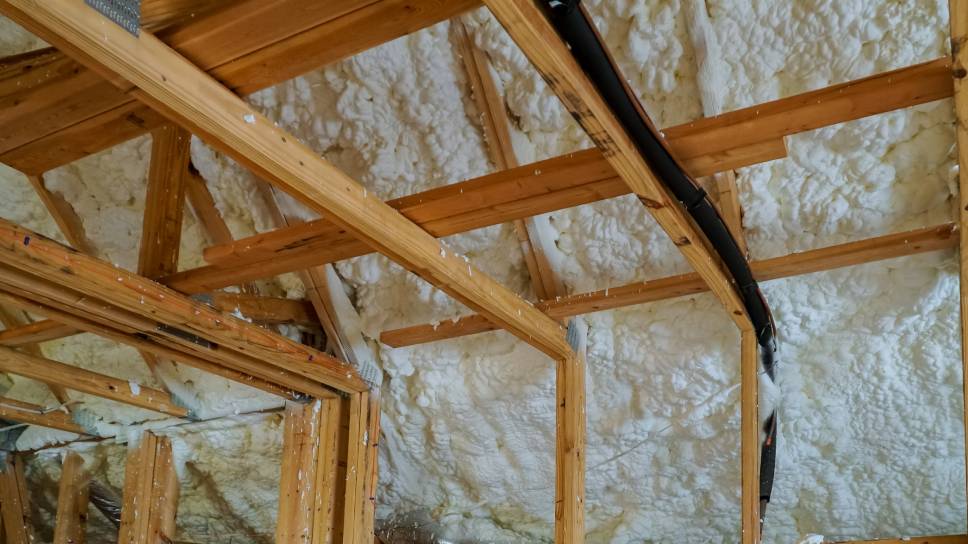 Polyurethane (PUR) foam is rapidly becoming a popular insulation material. Currently, two types of polyurethane foams are used - PIR (polyisocyanurate) and PUR (polyurethane). The foam has an additional advantage which distinguishes it from the materials used so far, namely the option to use it in two forms - as a hard board or as a material sprayed directly onto the insulated surface. The latter one wins more and more recognition in the market of thermally insulating building materials.

The name "PUR" stands for polyurethane, obtained by mixing two raw materials - polyol and isocyanate. As a result of mixing these components, with the use of specialised spraying machines, polyurethane foam is obtained. This type of insulation material is now widely used in building industry as an alternative material for insulation and thermal insulation of buildings, from foundations up to the roof. PUR foam performs very well in terms of user safety and functionality.

A strong advantage of polyurethane foam is its speed and ease of application. It is applied with a spraying method, owing to which it increases its volume several dozen times in a few seconds and hardens in a rapid pace. PUR foam perfectly adapts to slanted, difficult surfaces, penetrating into the smallest gaps.

PUR foam is classified into open-cell and closed - cell insulating material. The former one has a sponge-like structure. It does not let water in and has very good thermal insulation properties, but allows steam to pass through, so that no fungus or mould can form underneath. It is lightweight, so you can, with the prior use of a membrane, spread it on the formwork under the roof. Closed-cell foam, on the other hand, is slightly harder and is better suited for use on the outside of buildings. The internal structure of closed-cell PUR foam is made of microscopic closed bubbles, so it has good thermal insulation properties as well as high rigidity and appropriate hardness.

Spray polyurethane foam thermal insulations are mainly used to insulate building partitions against heat loss from inside the building. They are used both in industrial infrastructure (pipelines) and during insulation of foundations and roofs, as well as thermal protection of skeleton walls of buildings.

The insulating properties of PUR foams enable their application, among others, for thermal insulation of:

Polyurethane foams in accordance with standard PN-EN 13501-1 usually have a reaction to fire performance class E, which means a flammable, self-extinguishing material. Polystyrene foam, for example, is of the same class. The investment cost of polyurethane foam insulation is sometimes considered to be one of the disadvantages of this solution. However, taking into account the fact that the price per square metre includes not only the material but also the workmanship, the final cost is comparable to the installation of other insulation materials. 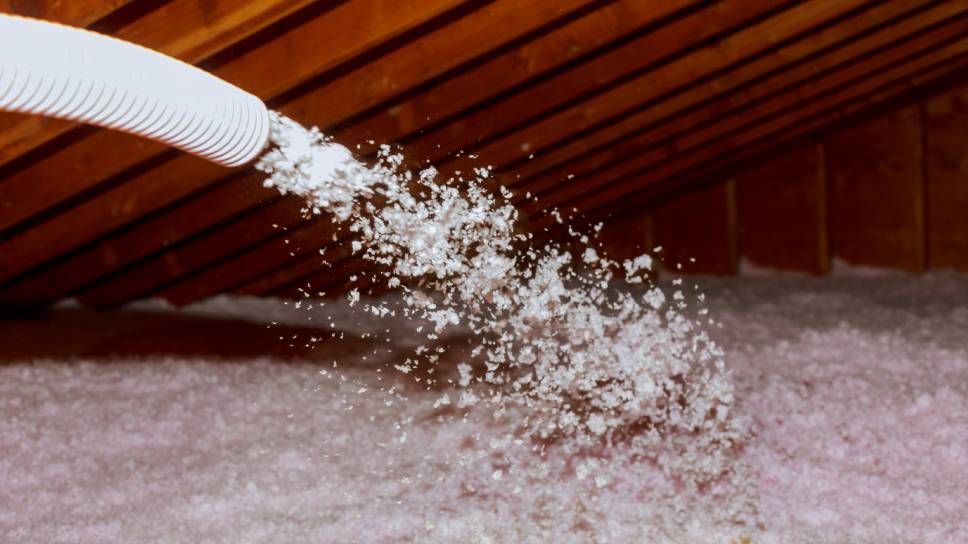 This insulation material has very similar physical and chemical characteristics to mineral wool, but its use is much more limited. The heat transfer coefficient for this product is 0.039 W/mK, but despite this, cellulose fibres also provide good sound insulation and good vapour-permeability.

Cellulose fibres have the ability to absorb and release water from their surroundings, so there is no need for application ofa vapour barrier during insulation. However, there is one condition - the material must be well ventilated to allow it to dry fully. Fibres can be applied wet or dry.

The dry method is where the shredded fibres are blown into pre-conditioned spaces in walls, ceilings, etc., through special aggregates which allow the material to be sent over distances of up to 50 m horizontally and 30 m vertically. Fibres can also be poured in loosely, for example in the case of insulation of beam ceilings and floors on joists. The wet method, on the other hand, involves wetting the cellulose fibres with water and adhesive. This mixture adheres very well to walls and even ceilings.

Which one to choose?

There is no unambiguous answer to the question related to selection of the best thermo-insulating material available on the market. Each product presented above has its advantages and disadvantages, so the choice of wool, styrofoam, polyurethane foam or cellulose fibre depends mainly on your expectations and requirements, as well as the place of application.

When planning attic insulation you should consider materials providing energy stability for decades. Polyurethane foam fully meets this criterion like no other heat insulator. Learn the advantages and the total cost of open-cell foam attic thermal insulation.

The foundation is a structural element which is primarily intended for the proper transfer of static and dynamic loads from the structure to the ground. In practice this means that the foundation should ensure stability of a structure and at the same time guarantee that its settlement will be uniform and will not cause e.g. cracking of walls or ceilings.