The foundation is a structural element which is primarily intended for the proper transfer of static and dynamic loads from the structure to the ground. In practice this means that the foundation should ensure stability of a structure and at the same time guarantee that its settlement will be uniform and will not cause e.g. cracking of walls or ceilings.

Testing the ground for foundations

However, before deciding to build or even design foundations it is advisable to benefit from the expertise gained through geotechnical surveys. Furthermore, providing a geotechnical opinion is currently one of the conditions necessary to obtain a building permit for the construction of a house. Besides, conducting a thorough soil survey may also be obligatory due to the provisions included in the local spatial development plan.

Any professionally undertaken geotechnical opinion will allow a determination of three key issues:

Knowing the answers to the above questions and additionally knowing the ground frost depth, a decision can be made on the method of foundation.

Types of foundations and methods of their settlement

At the most basic level, foundations are categorised into indirect and directones.

An intermediate foundation, also called a deep foundation, transfers loads to deep soil layers when those close to the surface have insufficient bearing capacity or stability. If the ground has been weakened, for example by flooding, this type of solution is also used. The same applies if the plans provide for a structure to be founded, for example, on a slope. Indirect foundations are divided into supported, suspended and regular ones.

It is not surprising that designing and building this type of foundations is associated with considerable expenses. For that purpose it is not a very common solution to be applied in single-family housing. And also because a house is not going to be built on piles only - they have to be joined with a foundation slab or footings. This obviously generates additional costs. 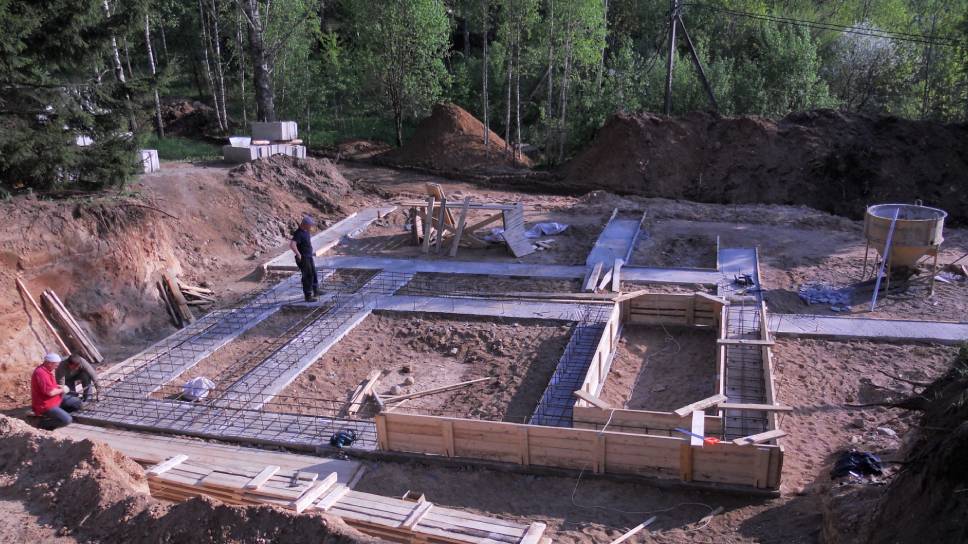 A direct, also known as a shallow foundation, transfers the load directly from the structure to the ground. If the bearing capacity of the foundation does not drastically deviate from the values recommended by building standards, it can be additionally stabilised. If this cannot be done for various reasons, then intermediate foundations are used, such as pile foundations.

The most common types of direct foundations are strip foundations, spot footings and slabs.

Of course, the expert responsible for the design of the house decides on selection of the best solution. This is particularly important in the case of a stepped footing, which is often used as a foundation in buildings located on slopes or extremely uneven terrain.

Foundation walls are built on the strip foundation - brick walls, made of hollow blocks or blocks, or monolithic walls made of reinforced concrete. Certainly, between the strip foundation and the wall there should be proper damp insulation, most often made of roofing paper. The foundation walls should also be insulated. Vertically, for example with PUR foam to protect against damp or temperature loss. And horizontally, with tar paper or a special film for damp protection. This is important both for buildings with and without cellars.

It is also important to bear in mind the issues related to frost depth. This is a factor directly influencing the cost of the strip foundation. The depth of the strip foundation must be below the ground frost elevation. If this is not the case, the freezing water in the ground can push out the foundations, causing the walls to crack. In some regions in Poland, the ground frost depth can be up to approx. 140 cm. Therefore, if you do not want to make such a deep excavation and in addition there are no geotechnical contraindications, a foundation slab is worth considering.

It is a foundation that transfers point loads to the ground, for example from pillars. If the building is settled on a footing, then footings are also placed under chimneys or stairs. As part of modular houses, they can be the most important support for load-bearing walls.

Footings used in single-family houses usually have a square or rectangular base. However, in the vertical cross-section, the structure may take the shape of a step, rectangle or trapezoid. The reinforcement takes the form of a grid of steel rods located at the base of the footing. In addition, additional bars are anchored in it, which are then connected to the reinforcement of the chimney, pillars or stairs.

The slab is a reinforced concrete monolithic base poured directly on the construction site. Its thickness usually does not exceed 30 cm, but this is not the total thickness of this type of structure, because under the slab there is also a base layer of lean concrete, and sometimes also a thermal insulation. The slab is of course reinforced with steel bars. It can be used both in buildings with and without cellars. Its great advantage is that, if properly reinforced, it is very stable, as the weight of the building is distributed evenly on it. It can be successfully used on non-uniform soils of different load-bearing capacity.

When choosing a foundation slab it is important to consider several important issues.

In the past, the issue related to selection of the foundation for a house was practically non-existent, as it was mainly built on strip foundations. Today, however, an increasing number of builders are opting for a slab, partly because every year there are more and more contractors who are familiar with proper slab construction.

This is probably the biggest problem with this type of structure: it is a very bad idea to build it yourself using a simple concrete mixer which you can buy in a DIY store, as opposed to building a strip foundation. The parameters of the concrete mixture must be identical to those indicated in the design, which is easier to achieve when using a concrete mixer. In addition, if a mistake is made, for example in connection with the plumbing, and we have to get down to ground level, forging in the slab is incomparably more time-consuming and labour-intensive than removing the lean concrete base on the footing. This is also due to the presence of double or diffuse reinforcement. In addition, there is the obligatory thermal insulation. All this makes the slab a more expensive solution than a strip footing with an underlay.

On the other hand, a foundation slab makes a perfect solution on soils of different load-bearing capacity as well as in locations where the groundwater level is too high. The load transferred to the ground by the slab is evenly distributed, which can be a problem for a strip foundation located in a subsoil with different load-bearing capacity levels. It is indeed more difficult to design it, but this should be the responsibility of an expert, not the owner.

Therefore, if you do not know what type of foundation to opt for, it is worth making a simple distinction:

This is obviously a very tentative recommendation. The final decision should be made upon consultation with a surveyor and the house designer.

Polyurethane foam is undoubtedly an excellent insulating and sealing material. There are numerous types of this product in the market, therefore it is worth learning more about their properties. Find out how particular types of polyurethane foam differ from each other and what is their application.

We received a certificate for Purios 500 - ICC-ES®. This document not only confirms the high quality of the product, but also allows us to freely introduce our foams to the US market, which is the most demanding. It is also a confirmation that the Polish product can compete and win with American foams.

Published in October 2017, the Global Polyester Polyol Market 2017-2021 report presents the situation and forecasts for the development of the polyester polyols market by 2021. According to the data collected in it, the Polish company Purinova is one of the key players in the dynamically developing polyols market.